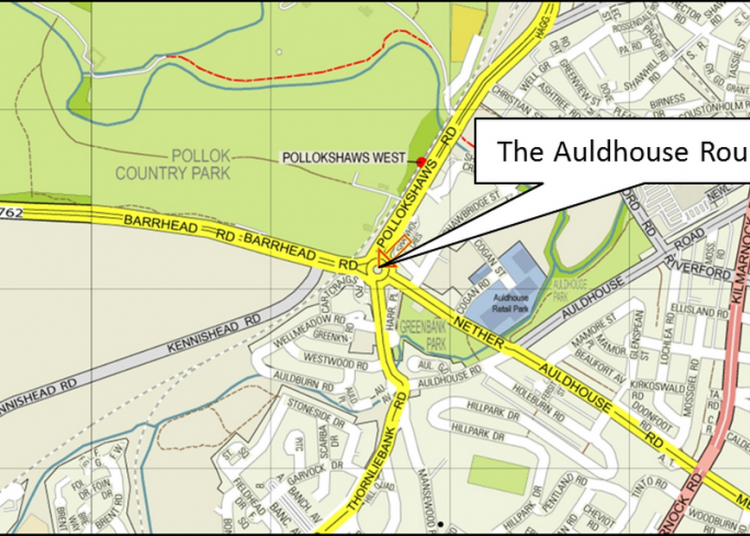 It doesn’t need saying that cycling will always have its safety uncertainties and I wouldn’t usually focus on one particular bit of road infrastructure. All the same, I take a personal interest in the Auldhouse Roundabout. It’s a busy urban junction near Pollok Park, Glasgow, mainly as I have to cross it most days cycling north and southbound.

I have suffered numerous near misses at this location and these have prompted me to reevaluate the government STATS19 vehicle collision dataset, available for the years 1999-2020. It is not good news. The data show this single location has the highest level of car-cycle collisions in the whole of the city of Glasgow. Note, however, that STATS19 omits all incidents where the police were not called, which is a significant underrepresentation of vehicle-cycle incidents.

High speeds and poor sightlines are a possible contributing factor

The Auldhouse Roundabout not only feels dangerous to cycle, the many near misses I and others have suffered attest to this, but the STATS19 data for the period 1999-2021 confirms it to be so. It unequivocally has the highest number of vehicle-cycle collisions for any single location in the Greater Glasgow area, with 24 collisions to which the police attended. There are other junctions of concern, but they are outwith the scope of this summary. The heat map below gives a graphic presentation of the collision density at the Auldhouse hotspot.

STATS19 data contains the precise location of the collisions. It strongly clusters around the western entry point from Barrhead Road. The dataset confirms 14 out of the 24 collisions involved motor vehicles heading east, i.e., entering from the westerly Barrhead Road. Cyclists were more variable in their direction of travel.

What are the causative danger factors?

The latter encourage drivers to maintain high speeds rather than slow down. Compare the images below. The first is what a driver on Barrhead Road sees approaching the roundabout. At only 70m away it’s nearly invisible. The second shows the sweeping bend when a driver gets there. There is no encouragement to slow down.

When do Collisions Occur?

Collisions are broadly spread out across the year, though a peak in December suggests darkness is a compounding factor. This is supported by the observation that more collisions occur between 7 and 9am than any other time, with no collisions recorded midday. There are also fewer collisions on the weekends. Taken together, these data imply it is substantially cycle commuters who are the victims.

Despite the limited nature of the data, the five-year moving average suggests less than 1 collision/year prior to 2008, rising to an average of about 1.5 collisions a year after 2015. In 2020 there were an astonishing four collisions

Twenty one of the cyclists involved in the collisions are male, mainly middle aged, Three were female. The relative dearth of female casualties is partly explained by the ONS statistics which show that women generally form 25% of the cycle commuting population. Even so, they are relatively unrepresented in this collision dataset giving rise to the question, are Glasgow Southside women safer cyclists than men, or they not so bold (damn-fool?) as to try to cycle over the Auldhouse Roundabout?

Time is now for discussion and action

We have twenty two years of data showing that this roundabout is not only egregiously dangerous for cyclists, but getting more so year-on-year. Thank goodness no one has been killed, but unless action is taken, the chances of a cyclist dying here remain predictably and depressingly high.

For me, cycling northward past the Barrhead Road junction feels like playing Russian Roulette. I often ask myself, “Has that car driver speeding to the junction seen me?”. Mibbe’s aye, mibbe’s naw.

The reasons for the high cycle collision rates on the Auldhouse Roundabout cannot as yet unequivocally be proven, but as a short term measure lowering the Barrhead Road speed limit and modifying the sweeping/flared junctions are highly likely to improve cycle safety. Ideally the council should install a cycle-friendly “Dutch-Style roundabout”. Thankfully conversations with Glasgow City Council have recently been re-initiated, but council is yet to acknowledge the need for investigation and remedy of this major cycle collision hotspot. I hope to convince council of the urgent need to do so.

So far I’ve avoided an actual collision on the roundabout but it’s been close for me on several occasions. Unfortunately it’s been disastrous for 24 other cyclists who deserve better.

Let’s get it fixed.