In Scotland, the threat of wildfires endangers not only the environment but life itself 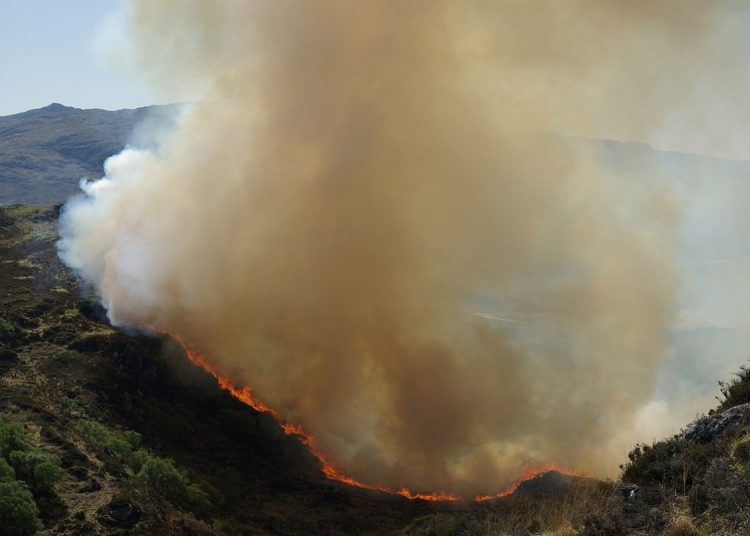 As the owner manager of a small woodland north of Glasgow and member of a local residents’ group, I have been involved in a series of discussions on the subject of fire risks and threats involving local and district councillors, as well as a national park authority.

We have witnessed first-hand the horrifying images of an untamed inferno, the emotions of helplessness and fear. Coupled with that is the aftermath; the scared landscape, the long-term impairment to the environment, and the unseen harm to the ecosystem.

My family and I spent many years living in Greece, and there we witnessed some of the horrifying effects of wildfires. We have felt fear watching the sky turn dark with smoke, as explosions of flames spread through woods and fields at shocking speeds. On three occasions our neighbourhood was threatened and we faced the real prospect of losing our home. We witnessed thousands of acres of hillside turn into an inferno in minutes.

Global warming is leading to longer periods of dryness, drought and wildfires. The underlying causes have been left uncontrolled for too long. In Scotland, as elsewhere, there is an urgent need to prioritise the mitigation of wildfire risk. Sir David Attenborough, addressing a climate change conference in Poland, said, “If we don’t take action, the collapse of our civilisations and the extinction of much of the natural world is on the horizon.”

The increasing number of dramatic stories in the media about wildfires in other parts of the globe may not be seen as a cause for alarm here in Scotland, but by looking at the reality of the situation we see that all parts of the world are burning at an alarming rate. Justin Adams, Executive Director, Tropical Forest Alliance, maintained in 2020 that “It’s increasingly clear that … we’re … in an era of megafires.”

The situation is getting worse

In Scotland itself the incidences have been accelerating at a considerable rate, with the annual rate of wildfire numbers in Scotland quadrupling in a year. BBC News reported in 2019 that “Between June and August last year, 2,329 grass and woodland fires were recorded across the country.”

Forestry and Land Scotland describe Scotland as a natural environment for wildfires, commenting that“Wildfires are generally more likely to start and spread on grassland or moorland in the UK, … But Scotland’s forests are among the most productive in Europe, providing an abundance of potential fuel for wildfires.”

We need to be conscious of the reality that wildfires are already a present threat in Scotland, not a risk for the future, and that the situation is getting worse.

So, what will it take to get people to take this matter seriously? Little foresight is needed to imagine how bad things will get if Scotland fails to get ahead of the game. All of us have an opportunity to be proactive rather than reactive, to take the initiative to get involved and pressure the authorities to take precautions now rather than reacting to the consequences later.

Firstly, there needs to be a far-reaching public awareness campaign. In March 2021, BBC Scotland reported the results of a survey: “… most people are unaware of the changes that are coming. Only 16% expected more wildfires, despite Scotland already seeing a dramatic rise in these.”

In other countries, for example, the US and Canada, there is much more emphasis on public awareness. The Smokey the Bear Campaign has been educating Americans on how they can prevent wildfires for over 75 years. There is even a day dedicated to this specifically: Wildfire Community Preparedness Day is held on the first Saturday of May each year.

An important fact in any campaign is that wildfires are rarely natural. The US National Park Service said that “90% of wildfires in the US are caused by humans – whether by unattended campfires, burning debris, cigarettes or arson.” Area Commander of SFRS Bruce Farquharson said “Wild and grass fires can start by the careless disposal of cigarettes and barbecues or campfires left unattended.”

Citizens may need to know how to choose a site and build and manage fires and barbecues correctly. An SFRS commander said: “Disposable barbecues remain a problem but also the increase in wild camping can create issues, such as what appears to be a decrease in the knowledge of how to build and run a safe campfire”.

My own experience lends strength to the argument for increased campaigns to engage the public. Over the thirty years my family has owned a woodland, there has been an increasing incidence of destructive behaviour. I’ve noticed that the collection of wood used to fuel fires has involved vandalism, theft and damage to trees. Visitors often attack live trees with chainsaws and axes, many damaged beyond any hope of survival, and this also threatens natural habitats.

The time to take action is now

Secondly, the issue of wildfires must be prioritised and impactful action taken. In March 2021, Bruce Farquharson, said: “If things don’t change in relation to where the climate is differing and to human behaviour then the fires we will see in the UK will be similar to those that are being seen in Portugal right now. If we look at the fire behaviour that we see in Portugal, unfortunately that will lead to loss of life.”

The Scottish Outdoor Access Code (SOAC) provides general guidance to be followed across Scotland, and the latest amended guideline ‘Managing camping with tents in Scotland’ (February 2021) contains a wealth of information and updates on responsible camping. However, SOAC guidelines are differently interpreted by different National Parks (NPs) and are poorly enforced. There is a need to coordinate all NPs to have a consistent message, with toughened guidelines and legislation. In warnings recently announced by the SFRS people are simply asked to exercise extreme caution. Surely it should not be left to an individual’s discretion.

Effective action is needed to publicise extreme fire risk warnings. Currently when warnings are announced by the SFRS, it is highlighted on their own website and on various social media platforms. Unfortunately, the vast majority of the public are not even aware of such warnings, and fires and barbecues continue more or less as usual.

Greater coordination is highly desirable between all interested stakeholders to drive the whole issue to a higher level. Bruce Farquharson, Area Commander of the SFRS said: “Wildfire Groups – partnerships between local fire services, estates and land operators – should be widely established across the country’s regions to further educate the public and develop a better understanding of wildfire risks”.

As a final note it is very evident from my research that there are a number of dedicated individuals within the SFRS who are passionate about the whole issue of wildfire prevention and response. They deserve credit and support from all of us – and probably increased budgets.

There is hope for the future

There are many possible protagonists in the continuing destruction. Some may blame our generation and previous ones for their lack of care, or the neglect of those in power who have prioritised personal or political agendas. The replacing of natural beauty with ruin is not only putting the environment at risk, but also the safety and well-being of wildlife and people. All this is depriving future generations of the pleasures of enjoying the natural heritage we have.

Although things are currently getting worse, it is not too late. If we all take part and do what we can to support necessary changes we can significantly improve the prospects of the beautiful Scottish landscape and the life within it.

But in the end, it’s up to us as individuals to get involved; we need to become proactive and put pressure on authorities and decision makers to take more action on mitigation of fire risks. We need to get the younger generation involved in public awareness campaigns at all levels, maximise interaction with schools and youth organisations. Look at what Greta Thunberg has achieved. Let’s follow her example.

[Ed. note] Martin Murphy’s article, above, is a synopsis of his excellent attention to detail research on the real threat of wildfires in Scotland. You can read the entire research article by following this link.

Martin started his career as a quantity surveyor and retired as a project development manager. He spent most of his life abroad and now splits his time between Shrewsbury, Athens and Callander where his family owns a small woodland. Interests include travel, hiking and the environment with a particular emphasis on protecting the countryside.