On the release of his new single, Jayson Winters reflects on democratic engagement and the barriers to achieving societal change 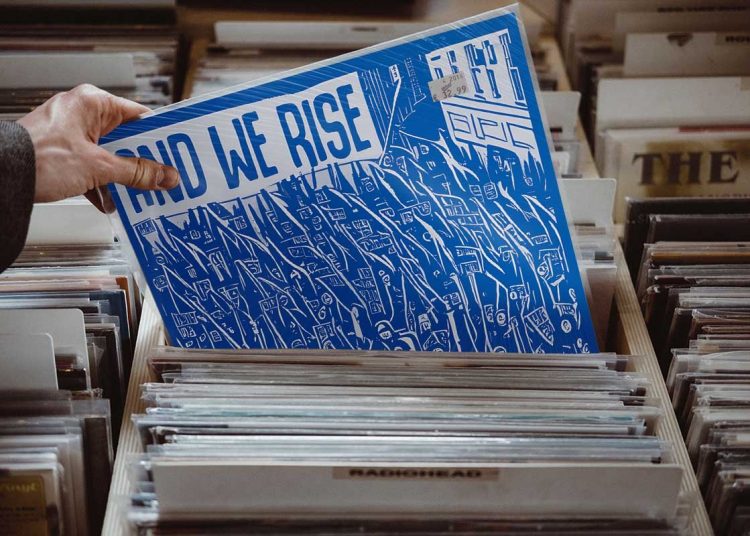 And We Rise, album cover, photograph courtesy of the author

I used to help set up new processing centres for an international bank, and part of my role was to report on how new team members – often displaced from traditional branch banking roles – were faring in their new roles. I remember reporting to my very experienced manager examples of things I heard.

There were complaints about not being able to get parked in the morning, and that the drinks machine often ran out of their favourite option. My manager would carefully listen to all the issues I raised and, more often than not, she would smile and say, “Good! Simple stuff we can get fixed. Grumbles like that are healthy and a good sign that nothing serious is amiss.”

However, when we noticed that one of the supervisors could regularly be found ‘holding court’ in the staff room, and there was talk of a staff newsletter, we were encouraged to pay a lot more attention to what was being said. At the time I was probably too naive to really understand the dynamics of what was going on.

The court was broken up with many minor nudges intended to clip the power of this new people’s leader – from changing around break times to tweaking the balance of responsibilities with other staff – our own way of dealing with the tallest poppy, I guess. The management pre-emptively launched their own newsletter and exercised editorial control over it, so nothing more was heard of the staff-led newsletter and people went back to complaining about the drinks machines being out of chocolate cappuccino.

It’s become clear to me over the years that we are regularly nudged in subtle and sometimes not-so-subtle ways to keep us compliant by those in power.

All of my life I’ve been fortunate enough to live in a country that has kept me (and nearly all of my fellow citizens) just happy enough to vote for the usual parties and for me to be generally civilly obedient.

People’s leaders have gained popularity from time-to-time, but have been intent on shifting the country further away from my vision of what the country could be, rather than towards it, so they haven’t inspired me to become more politically engaged.

We consume the news that is made available to us and many of us accept this as an accurate narrative of events, which neatly mirrors the second lesson from my past – controlling opinion by controlling the news.

I became democratically engaged at around the same time as many others in the UK, following the 2010 financial crisis and in the environment that led to the Brexit referendum.

Remembering the subtle controls that managed the peaceful running of our new processing centre in my past career, I’ve often reflected on the many ways we are kept compliant during a time where income inequality is so high many people are being pushed into poverty. At the same time, most of the press and the UK Government have never seemed more intent on realising a vision of the UK that I want no part of.

Have we ever been in more need of the right people to lead us and our thinking into better, more positive democratic engagement? Have we ever needed trustworthy, independent new sources, like the Bylines Network, more than we do now?

We can be inspired by music

We can all find our own way in becoming more engaged in democracy, politics and social change.

I’ve always turned to writing and recording music when feeling overwhelmed, whether by teenage crushes or adult injustices, and now have quite a back catalogue of songs with a political or social message. For example, ‘Wrong Door’, a rock song where the ‘wrong’ division lobby is chosen through self-interest and privilege, and ‘Women and Flowers’, written to remember the mis-handling of the Sarah Everard vigil on Clapham Common.

As a musician-of-a-certain-age, whilst I genre-hop all the time, I am often drawn back to the 90s and 00s and have a special fondness for Scottish indie rock. For me, it speaks more powerfully and with more character than so much other music. The sound (and indeed the story behind) Glasvegas’s ‘Geraldine’ stir my deepest emotions on every listen. The slightly shambolic ‘If You Don’t Pull’ by The Just Joans is more important to me than the most polished of performances of more mainstream leanings. Early offerings (yes, I have fallen into that trap of very rarely enjoying a band after their second or third album) from Belle & Sebastian and Snow Patrol are amongst my favourite tracks of all time.

So, whilst English, I have a huge affinity for Scottish music and the Scottish people that inspire and make it. And that’s how I came to write ‘And We Rise’.

‘And We Rise’ is about standing up and being heard rather than storming parliament. I wanted to write a modern protest song in the style of the great Scottish indie bands and I hope I’ve achieved that.

I recruited a Scottish vocalist to deliver the spoken word part –which is the most authentically and overtly Scottish element. The main vocalist is a professional rock singer from Cambridge in England. I played or programmed all the music.

I’m not making a call to arms with ‘And We Rise’, but with it I hope I will inspire some people to become more democratically involved and be aware of the distractions that keep us from achieving radical change.

‘And We Rise’ is released under my artist name Eternal Planes and is available from all the usual streaming platforms, but YouTube is a good free option for listening if you don’t have a streaming account.

A note on the artwork

As a graphic designer, I was inspired by the wood or linocut artwork from Glasvegas’s debut album and also keen to try out NightCafe’s artificial intelligence software to generate some original art. The selected cover and the examples below were generated with the prompt “March Protesters Linocut” and another one I liked used “Scotland Linocut”.