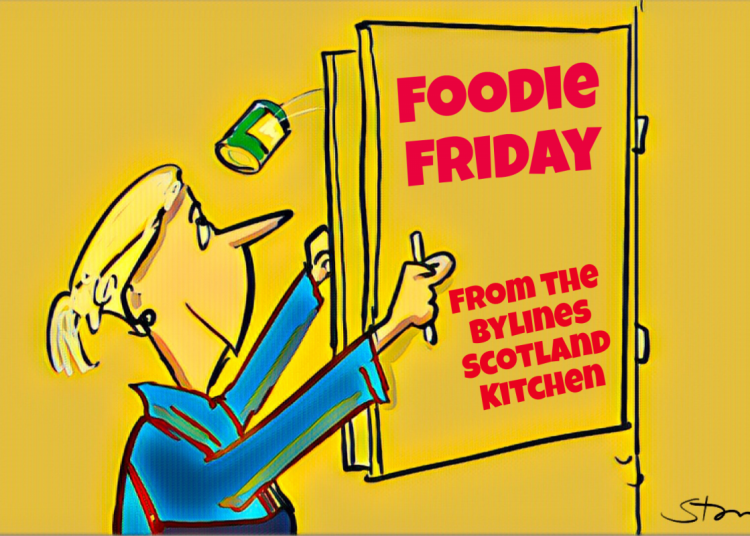 The earliest recipe for lasagne was recorded as far back as the 14th century in Liber de Coquina (The Book of Cookery/Cooking), reported to be one of the oldest medieval cookbooks; perhaps it was the Hairy Biker’s British Classics of that era. In the seven centuries since the medieval best seller, the Italian dish has been presented with a wide variety of variations and fillings. So I don’t think I’m denigrating a beloved ethnic cuisine.

What I’m offering on Foodie Friday is a vegetarian dish, not vegan. Undoubtedly you can find lasagne recipes for most all dietary needs. For example, there is a raw vegan lasagne, if that floats your boat. It looks wholesome and nutritious. I’ll give it a shot between now and my best before date and review it on a Foodie Friday.

There have been gazillions of tweaked lasagne recipes since the 14th century, when the Black Death swept across Europe, unlike, ahem, ‘happier’ times today. So what’s the original? Who knows, who cares! My first recipe was from a cookbook long forgotten. In the quest to perfect a meal harmonious to the family’s taste, I added or removed spices, chucked walnuts and almonds, fooled around with celery and courgettes, and dabbled with mushrooms and tomatoes.

In the late 1980s, my wife and I came out of the cupboard and told everyone we were vegetarian. We didn’t label ourselves at first, we just said we did not eat fish, fowl or meat and the by-products of same. It was a different era for herbivores 35 years ago in beautiful downtown North America. Hunting for good food, intently reading ingredients on labels and trying strange new recipes was a pretty steep learning curve. Although our biggest challenge was stultus populus.

Out of the hunt for new meal variations emerged Lasagne Vegetariana. Sure, it’s Italian for vegetarian lasagne but I thought I’d dress up the name to honour the origin of the dish.

How does one create this scrumptious meal that I lovingly prepare and present to my family at least twice every three months? As with any meal, time is the biggest contribution.

How long will it take from preparation to serving?

For the gathering, chopping, measuring of ingredients, putting it all together in a dish and making it ready to cook you’re looking at 90 minutes. Add an hour for actually cooking my beloved masterpiece, then 5-10 minutes of rest so everything can set. So plan for 2 hours and 40 minutes, 3 hours tops, from preparation to serving.

Speaking of serving, using the size of the serving dish noted below, this recipe makes a full serving for six, or more in smaller portions if served with a salad or other accompaniment, such as Sue Dymond’s Red Cabbage Slaw.

You’re going to need these items and ingredients

Preparing the lasagne dish and mince

Time to prepare the cheese sauce

Add the following to bowl #1, stirring in each ingredient one at a time until thoroughly combined.

Add the following to bowl #2

Putting it all together

Deliver your creation to the oven

Leftovers can be frozen for up to three months. For re-use, thaw, then microwave on high for two or three minutes.

Foodie Friday is published weekly. If you have a favourite recipe you’d like to share with Bylines Scotland’s readership then please email your contributions to editor@bylines.scot and be sure to type Foodie Friday in the subject field. Thank you for sharing.

Ian Kinsey was the first editor-in-chief at Bylines Scotland. He currently writes the weekly column, "Just a Thought|". A native of Salford, Ian has lived and worked in the Middle East, Europe, the USA and Canada before settling down in Scotland. In his eclectic career he has been a pilot, television and radio presenter, newspaper correspondent, public and media relations consultant, and aviation manager at Boeing and CHC Helicopter. Now retired, Ian finds solace in writing, music, reading philosophy, researching history, and playing with the cat.