A shameful period in recent Scottish history that still reverberates in our Traveller communities today. 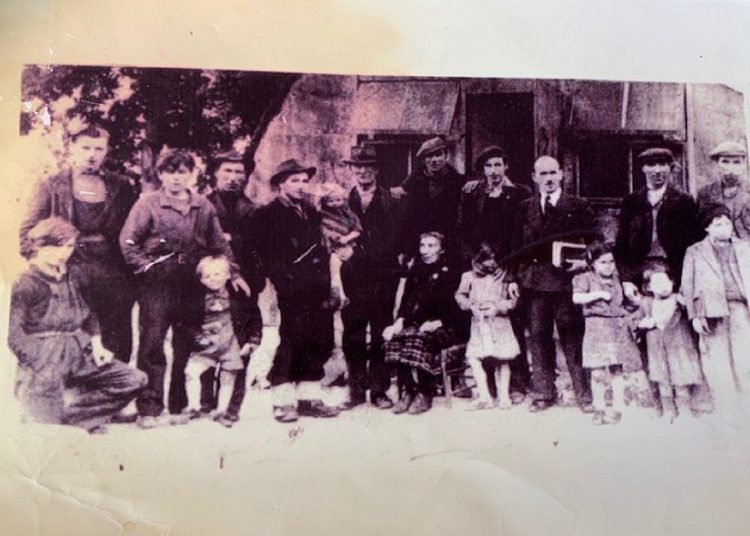 Circa early 1950s showing William Webb, Church of Scotland Chaplain for Tinkers in Scotland at an experimental site in Inverness Shire, Printed with permission by Nancy Gunn, descendant of the families depicted.

You may not have heard about the ‘Tinker Experiment’. It’s not taught in our schools nor discussed much in political circles. When you delve into the details of what happened you begin to understand why. The Tinker Experiment lasted from 1940 until 1980 and was a programme designed to integrate gypsy travellers into mainstream society. It was supported by the UK government and Scottish local authorities. At its most fundamental, the UK Government in partnership with Scottish Local Authorities wanted to take Travellers off the road and settle them in ‘normal’ housing.

Travellers were taken from their family homes and provided with primitive and cramped housing at a number of sites around Scotland. In many cases, the conditions were unsuitable and family groups had to be split up.

Brother and sister Shamus and Roseanna McPhee are campaigning for an apology.

An experiment that left lasting physiological damage and continued discrimination

Shamus and Roseanna grew up on former Bobbin Mill site in Pitlochry, living in a prefabricated World War Two-style Nissen hut which had no electricity, a coal fire for heating and candles for lighting. The site was later regenerated, and the huts replaced with wooden chalet accommodation.

The McPhees were among families settled in Pitlochry. Other families were accommodated on sites elsewhere in Scotland, including Muir of Ord and Wick in the Highlands

“We had one bedroom for nine of us. The living room had a coal fire and that was the only heating. Lighting was a Tilly lamp and candles in the bedroom.”

Rosanna said there was asbestos, a harmful and now illegal construction material, in the hut’s wall panels. When the asbestos was later removed, she was at home studying for her school exams when workmen took it out.

The McPhees argue that the experiment left lasting physiological damage and gypsy travellers continued to face discrimination and other challenges. They want a formal apology for what happened to them and their community. So far, Shamus reports that the Scottish Government has been ‘unapproachable’ and has failed to show ‘any willingness to meet with victims’ of the so called ‘experiment’.

When asked if he thought his community was being ignored by the Scottish Government he replied,

“Definitely. I think we all feel ignored. It’s not a case that we are demanding an apology, we’ve asked for an apology.”

What happened to Travellers and their families under the ‘Tinker Experiment’?

The details of what happened under the auspices of ‘settling’ the Traveller community are shocking to us by today’s standards. The idea that the UK Government, working in partnership with Scottish local authorities and church groups, could take children from their families and put them into residential homes to ‘knock the Tinker out of the child’ is now considered to be cultural genocide.

Similar attitudes led to the children of Indigenous communities of Canada and Australia suffering decades of abuse under similar moral attitudes prevalent at the time. Rosanna McPhee claims that some of the children sent into residential care in Scotland may have been taken to Australia as ‘orphans’ and put to work on farms in what was part of the post-war British child abuse scandal widely reported in the media.

The Scottish Government have been slow to say the least, in reacting to this request for an apology.

‘’Like my parliamentary colleagues, I have met with some of the families involved in the so-called ‘Tinker Experiment’, heard their distressing testimonies and take the issues they raise very seriously.

“The Scottish Government accepts that lives of many Gypsy Travellers have been blighted by historical policies and practices of councils and charities, and we absolutely recognise the devastating and lasting impact this had on families.”

She added: “As I said during a recent debate on this issue, it is time to turn words to actions and we must now focus on working together across political, organisational and geographical boundaries to deliver the actions that are so desperately needed, to address the inequality and injustice that this community continues to face.”

Other campaigners want to go further

Davie Donaldson, a Scottish Traveller and campaigner calls for a ‘full truth and reconciliation commission’. He said, ‘’I think it’s crucial the Scottish Government recognises the real impact that the experiment had on not only the victims and the survivors of the Tinker Experiment but on the generation that came afterwards in the form of cultural trauma.’’

The Scottish Government often makes the case for greater devolution and indeed full independence from the UK along the lines of how much better we will be if only we had full control over our affairs. Here is an ideal example  how they, the Scottish Government, could demonstrate how we can do better by engaging with the Traveller community, recognising that mistakes have been made in the past and attempting to forge a better relationship in the future.

A political and social failure we need to admit to

A full Truth and Reconciliation Committee could shine light on all the dark corners of past practice and name the organisations that have been responsible for blighting the lives of our fellow citizens and fellow Scots. In this way, the Traveller community can receive the apology they crave and the rest of us can learn about a recent chapter of Scottish history that we need to grit our teeth and face up to, to ensure nothing like it can happen again.

“The Scottish Government will be commissioning independent research into the Tinker Experiment to ensure we are able to fully capture and understand its implications, identify who was involved and affected, and ensure the community has the opportunity to share its story.

“Work is underway to commission this research which includes meeting with relevant organisations and individuals, to aid our understanding of this period.”

The Scottish Traveller Community has been seeking opportunities to share their experiences of this recent disastrous piece of social policy with anyone who would listen. The Scottish Government can only kick the ball down the road for a limited period of time. Eventually someone in Edinburgh has to call this for what it was; a complete failure politically, socially and morally.

We have a moral duty to ensure that the Scottish Traveller community’s needs are now met and that the research they want to carry out is done so swiftly, without further delay. In this way, we can attempt to redress the misdeeds of the past and forge a better relationship with Travellers and indeed with all our minority ethnic communities that make up our Scottish nation.

If you or any of your family have been affected by any of these issues, please contact Bylines Scotland at [email protected].