Kate Springford shares her story of adventure on one of the Isle of Skye’s best mountains, Sgurr an Fheadain 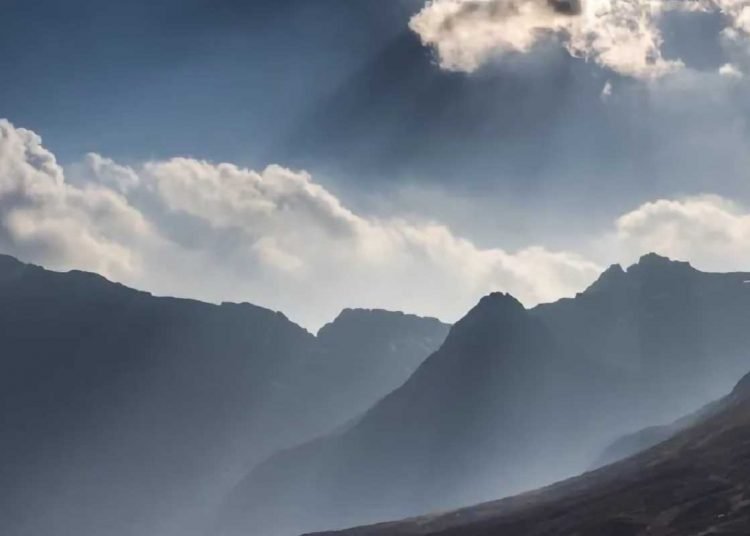 I have always been a bit nervous physically, while at the same time loving the thrill of physical adventure. So, who better to team up with than a couple of friends of ours who in anyone’s books would be called intrepid. On our many holidays, Dr Michael Richards and his wife Janet would be the ones who would strike out for the top or swim to the other side of a lake leaving myself and my husband George behind, not quite having the strength or the nerve to go that far.

Fortunately, they liked our company and we were game as far as we could be. Over several years, we had wonderful holidays together. Somehow, they always included some bridge, golf and walking.

In 1988, we decided to head for Skye. We loved Scotland and had been many times, but never to the island whose mountains are said to be the most beautiful in all of Britain.

We could see from the map that Sligachan was the nearest place to the mountains we could get, so I booked a cottage near the famous hotel there. We arrived and viewed the scene, which was, in fact, breath-taking – the Black and Red Cuillins all around us, racing skies and a stormy sunset.

We did a strenuous walk to break ourselves in and then planned for the great adventure the next day. According to our guide book, these mountains were free from cloud and mist, on average, for only 11 days a year and tomorrow was scheduled to be one of those. What good fortune, although no way out, I thought. The guide also said that the Black Cuillins were not suitable for walkers – only climbers, but the famous Alfred Wainright had written that there was a way up this Sgurr without ropes, but that it was ‘long, hard and could be exhausting.’

So, at eight the next morning, we set off, booted and carrying provisions, ready for the long first trek down the mountain path to Loch Coruisk. This is apparently the most famous walk on Skye. It took four hours of hard slog to get to the Loch, which was indeed breathtaking in its stillness, its beauty and its setting, surrounded as it was by the magnificent Black Cuillins.

Here we ate our lunch and debated whether we should go on. There was no doubt that the other two were eager, but George and I were wondering whether we would make it – another two hours round the lakeside and then the scramble up the mountain. I was very worried, but the alternative, getting back to Sligachan the way we had come, was equally daunting. So, we set out. 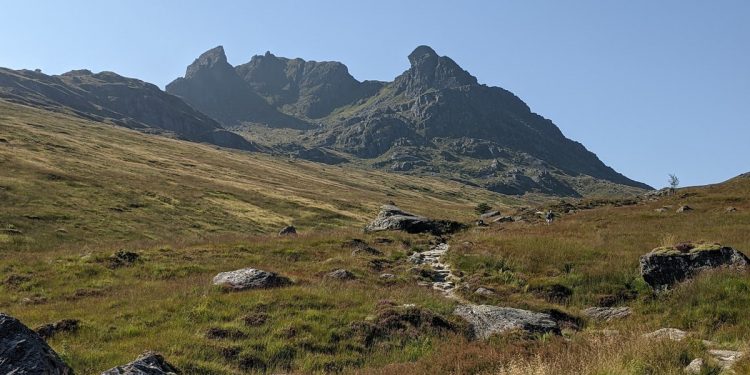 Scramble up to the Sgurr an Fheadain

One step at a time. The route was rough but the views were marvellous. Innocent as we were, we had no idea then, how lucky we were to see such beauty in clear light. Walter Scott had written about it and Turner and many others had painted it.

After two hours, we came to the end of the lake path and were faced with the scramble up to the Sgurr ahead of us -no going back now.

The going was hard. We were on all fours for the last hundred yards or so, through what’s called a couloir, overhanging rocks through which you had to go as if through a tunnel. But the views were sensational: huge sweeps of lake, mountain, forest, all sparklingly clear in the bright sunlight. We stopped frequently and at one point waved to a helicopter which came overhead, perhaps to check that we were okay. It didn’t frighten the beautiful gold crested eagles, their wide swept wings glinting in the sunlight as they soared above us in the clear air.

When we got to the summit, a small grassy plateau, the other three began jumping with joy and hugging each other and shouting, but I, within thirty seconds, had realised that there was actually no way down. The other side was a precipice with small platforms of jagged rock hanging out from the side. I felt very frightened. After gingerly trying for a few minutes to start the descent, we came back to the top.

Help on the horizon

I looked round rather hopelessly and, to my astonishment, saw a man about three hundred yards away appearing over the ridge on the skyline. Was this a mirage?  We hadn’t seen a soul all day!

In my loudest voice ever, I shouted, “Can you help us?” Even at that distance, I could see he looked sturdy and compact (a climber in fact). He loped over to where we were standing, examined our footwear and told us to follow him back along the ridge to where we had first seen him. We looked down on a frighteningly steep scree slope. I asked him to stay with us to help us down, but he mumbled something we couldn’t understand,took off like a bird and soon disappeared.

We did make it down and within another couple of hours were back home, but not before I had apologised to my friend for switching allegiance from him to the new feller. He replied that he would have found the way down eventually!

We were too late for my birthday dinner, planned for a really posh restaurant in the north of the island, and persuaded the local hotel to fix us up with something – soup to start with. You may find this hard to believe, but within a few seconds of starting the meal, my head fell forward straight into the warm liquid.

Kate Springford lives amid the South Downs in the town of Lewes, which she describes as "Wonderful walking country!" Kate's a partly retired business coach who loves the theatre, cinema and listening to Radio 4. But mostly she enjoys the time spent with family and her many friends. 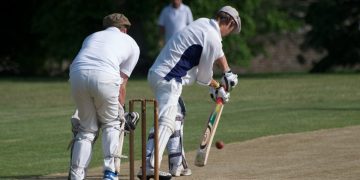