Burdened by a heavy rucksack full of perishable shopping and a camera, Dr Richard Milne is semi-committed to mingle with hardcore Royal watchers 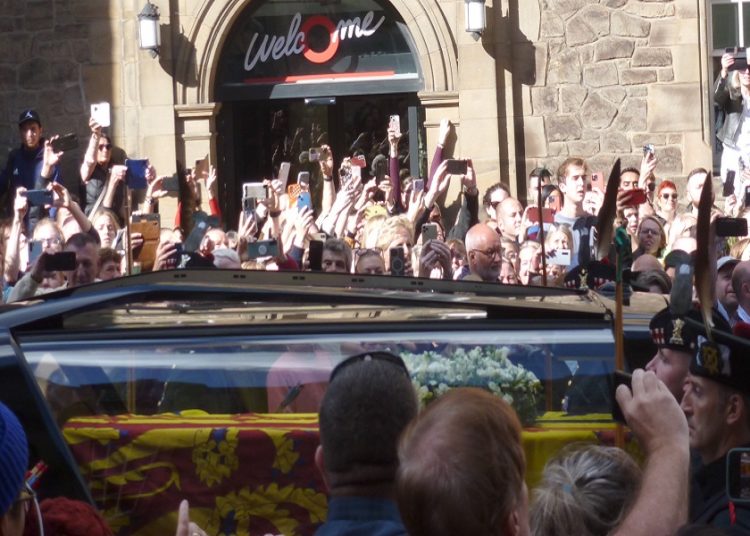 The one image of the Queen's coffin captured by Richard Milne following a Herculean effort to do so. Photo by the author, used with permission

We’ve all heard about the die-hard royal watchers. The ones who’ll turn up the night before with a seat, a stove and a sleeping bag, to make sure that they have the best view when a member of the royal family comes past. I’m not one of those. When it comes to plant hunting, I go all in, with hours and hours of research, planning and trekking, working out well in advance the best ways to avoid all the hazards and obstacles, be they physical, biological or legal. But for royal-watching, no. I just wing it.

I was at a work lunch, viewing botanically-inspired art by local Edinburgh artists, when someone mentioned that the Queen’s funeral procession would be leaving Balmoral at 2.30pm. It was just after 2pm now. I had my bike, my camera, and no early afternoon commitments. I could get there in time, so I thought, “why not?” and I set off. I did no planning of any kind, beyond trying to guess where a good vantage point might be that not too many others had thought of. Burdened by a heavy rucksack full of perishable shopping (like I say, no planning), I laboured up the hill and cut across to the entrance to Holyrood park by the swimming baths. The policeman waved me through, for it was only closed to motor vehicles, and soon I was on the grass by the Scottish parliament.

The last time I’d been here it was for an anti-Brexit rally. My little son had charmed the EU Supergirl, and come within a foot of knocking over Scottish Green leader Patrick Harvie in the middle of a rousing speech. Today’s was a different affair. Perhaps 100 to 200 people were here, not sombre, but quiet and respectful, hoping like me to catch a little glimpse of history. A glimpse looked like all I’d get though, what with lines of people several deep at all vantage points. So I brought some plant-hunter skill to bear, and hopped onto the little wall running along behind the crowd. A lady in her sixties followed suit, and at last we could see the gates to Holyrood Palace clearly. A second lady, younger but less nimble than the first, tried to get on as well. One leg up, then down, then over, into a sitting position, then a crouch.

She was almost upright when a security man strode up to us and told us all to get off the wall. Somehow he judged us a security risk – I didn’t have the heart to tell him that if he was worried about protecting the Queen, he might perhaps like to check the news from last week. Or maybe the bare pavement behind us contained vital national secrets. Anyway, down we got again, my one good idea down the toilet. I jokingly suggested to the older lady that she sit on her husband’s shoulders, like a festival-goer. “In my day, I would have,” she replied with a twinkle in her eye. As it was, the only person in such an elevated position was a two-year-old, fast asleep in a carry-rucksack. Something to tell his own grandkids, I suppose: “I was there for Queen Elizabeth’s funeral procession, and I slept right through it.”

Two thirty-five, and there was no visible sign of action. Brief snatches of bagpipe music, and shouts of “aaarrrhhh!!!” in the distance told us that something might be happening, but there was still no sign of movement from the gates. Five minutes passed. They’d better come soon, I thought, as I need to collect my son from school at 3.30. Then I noticed some movement from further away, across the roundabout beyond the Parliament building. They weren’t coming out of the gates at all, they were coming out of Abbey Street instead! I glimpsed a big coffin draped in a yellow flag, and desperately struggled to turn my camera on before it vanished out of sight. Was I the only one fooled? Judging by the positions of many of my fellow watchers, I don’t think so. I’m reminded of the classic Only Fools and Horses skit where they’re all ready to catch one chandelier, but they are in the wrong place, and a different one falls to the floor. I may have successfully photographed some of Europe’s rarest plants, but it turns out royal funeral processions are a far greater challenge.

If at first you don’t succeed …

But the show’s not quite over. A large, immaculately dressed marching band emerges from the park gates and sets off in the exact opposite direction to the one the Queen was taking, into the park and to the left. Perhaps they, like me, didn’t get the memo telling them the route. They are very impressive, but they’re not the royal procession.

I had my bike, and I had fifteen minutes at least before I needed to head for my son’s school. So if I hurried I could get ahead of the procession and have another try. I rode swiftly onto Holyrood road, which runs parallel with the royal mile, then along it for a few minutes, then into one of the funny lanes that connects the two. It ended in a tunnel with a barred gate at the far end. On my side of the gate were a handful of royal watchers, then beyond it, on the pavement, a throng several people deep. My view was even more obscured than before, but at least this time I was confident that the procession would at least pass close to me. I stretched my arm, placed the camera in between the bars as high as I could, and clicked hopefully as the procession came past.

God Save the King

“God Save The King!!!” shouted a young man next to me in a deep, serious voice. There followed a slightly awkward silence as no-one else joined in. I’d seen the coffin, but I’d completely forgotten to try and spot King Charles as well. Stretching my eyes, I caught sight of some figures walking behind the hearse, but the only one I could recognise for certain was Prince Andrew. Not the most popular royal these days, but for the period of mourning at least, he was at one with the others, a grieving son just like the new King.

With thirty-five minutes to go till school pick-up, there was time for one more try. Back to Holyrood road I went, along to the traffic lights, and up the steep cobbles of St Mary’s Street. But this was too obvious a vantage point, and I was at the back of a massive throng, where people far more organised than me had even procured chairs. This time, the only evidence I could see of the procession passing by was the change in the angle of the mobile phones held high in the air, by the people in front of me. And that was it. Time to go.

Back home, with my son safely collected, I checked my photos. I’ve managed exactly one image where the Queen’s coffin is (just about) visible. I’ll not be winning any prizes for that. But at least I was there. Three times, in fact, though I only saw it one and a half times.