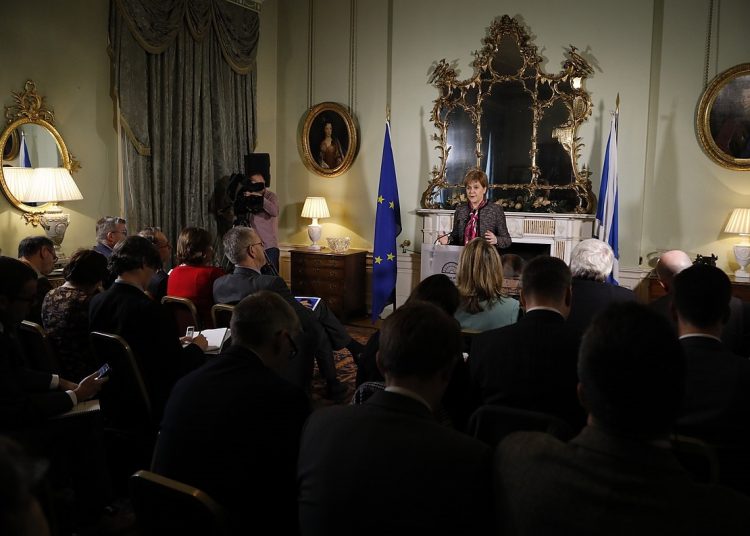 David Ogilvy was the undisputed king of the Mad Man era of advertising. An Englishman who turned advertising into as much a science as an art, he saw communication in very simple terms. He said advertising had to be interesting and if it wasn’t interesting why should anybody pay it any attention? He knew the value of wit and honesty in communication. He knew many more people read just headlines than read a full story. Most of all he knew that the core purpose of all professional communication is not only to inform but to persuade. Let’s bear Ogilvy’s ideas in mind as we consider how to keep the flame of EU membership alive in Scotland.

One of the most remarkable and most under-reported aspects of the 2016 referendum was the almost organic springing up of pro-EU groups across the UK. They appeared everywhere, from Glasgow to Canterbury and every point north, south, east and west. Even more remarkably, they are all still going strong. The UK now has the largest pro-EU activist pool in Europe. They are the UK heartbeat of the ideals that saw Europe beat swords into ploughshares and build a Europe-wide society of peace, free trade, free speech, free movement and the cementing of democracy in lands once cowed by authoritarianism and brutal dictatorship.

This network of groups has reenergised the once-dusty UK European Movement organisation and seen the European Movement Scotland become a more effective central hub for beating the drum for the EU in Scotland. There are lots of dedicated people, stimulating activities and informed debate going on. The flame is very much alive.

The challenge is to make it burn brighter so that Europe stays at the top of the Scottish political agenda and is alive in the hearts and minds of millions in Dundee tenements, Aberdeen mansions, Border farms and Lerwick cottages. A positive and achievable vision in the minds of business owners, teachers, hospitality workers, dentists, bus drivers, fishermen, ministers, care workers and folk in every trade, profession, job and status.

What do we want to be famous for?

But there is a limit to voluntary time and always a limit to money. There really isn’t very much money at all in Scotland’s EU-supporting coffers, and certainly not enough to mount a paid-for campaign. So, how do we get more bang for our limited buck?

Let’s start with a question David Ogilvy would most assuredly ask. What’s the one thing we want to be famous for? What’s the first thing we want people in Scotland to think when they see an EU flag? What’s the immediate emotional response? There are obviously several candidates for the job, but I’m going to opt for success. I want people to think first that the EU is a success. Indeed, I want them to think that they can again be part of that success. We might even consider a tag line. In the trade a tag line is called a proposition – a line that implicitly or explicitly offers benefits. Here’s one for starters.

The European Union – where Scotland can join in success. That means giving our audiences, in another phrase beloved of professional persuaders, permission to believe. This is classic marketing. It’s not enough just to say Buy Joe’s beans. If you want to build a lasting relationship with the consumer you have to tell them that Joe’s beans are not only tasty and affordable but better than any other beans because Joe’s beans are picked fresher, packed quicker and free from nasty additives. Are you more prepared now to believe in Joe’s beans?

The advantage of the list above is that they are all true. They pass another great test of effective communication, credibility. When we say Europe is a success, we can demonstrate it in clear, simple and verifiable ways.

Next in the formula of effective communication is ubiquity. Commercial brand owners and political parties financially supported by the very wealthy can buy a great range of communications to ensure they are seen often by their target groups. Everything from prime poster locations to highly sophisticated digital activity that tracks target behaviour, and algorithms that deliver key messages almost wherever the consumer goes on their digital journeys. But Scotland’s pro-EU funds are no match for that kind of spending. To be seen often and everywhere means using simple, some would say old-fashioned techniques.

The most powerful is the EU flag itself. It is the brand identity of 400 million Europeans and for those who had their European identity snatched from them. So, let’s see it everywhere. On bumper stickers, windows, web sites, social media handles, on flag poles. Can we get a Scotland Loves EU credit card? Can we model the flag in garden flowers? How about in Lego for a day or two in George Square. Stimulating, interesting and witty ways of flying the flag. Let’s put out more flags.

It will help greatly if communication is regularly refreshed and kept interesting. Some old saws still have legs. How about dividing the year into four themed quarters. For example, education; trade; culture; sport and even quarters given over to EU nations, each having its own launch day and speakers, cultural events and social gatherings.

What we are trying to do here is make the heart beat a little faster, to make the whole greater than the sum of its parts. And the holy grail is to convince the great majority of Scots, new and old, that there is a better future for them and their kin inside the EU and, eventually, be politically motivated to vote for that to happen.