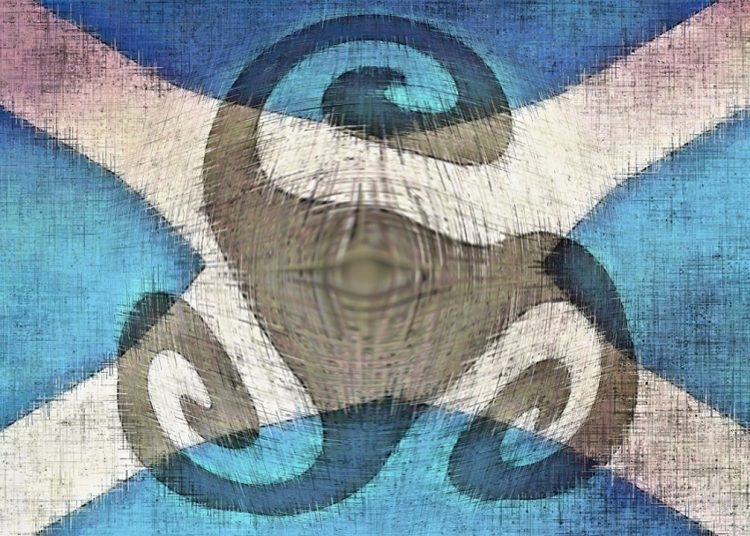 The Saltire and the three spirals on the Triskelion symbol believed to represent the three worlds: The present physical realm. The spirit world of ancestors. The celestial world of the sun, moon, stars and planets. Image by Martje Ross printed with permission

Scotland has two native languages: Scots and Scottish Gaelic. Many people will have just disagreed with that statement, even though it is factual. The opposition to minority languages in Scotland is purely political, as languages usually are.

Gaelic emerged as its own language sometime in the 13th century, descended from Middle Irish. At one point in time, Gaelic would have been spoken by almost everyone in much of what we now call Scotland. We have evidence of this through place names such as Dumfries, Inverness and Portree. It was the language of the high classes and the Royal Court. Gaelic was almost everywhere in Medieval Scotland, and it did not have any links to nationalism then.

So, what changed? Well, attitudes towards the language changed; when the language of the Royal Court and Church changed to English, people turned against Gaelic. And this is where we see Scots emerging as a language from Middle English. Gaelic was pushed into the north and the west, with the rest of Scotland now favouring Scots.

We can see this attitude change clearly through the names given to the languages in this period: Gaelic was referred to as Erse, or Irish, and Scots was referred to as Scottis. In 1872, the Education (Scotland) Act was passed by the UK Parliament, which made education compulsory for the first time, but only had provisions for English. This meant that Gaelic wasn’t taught in schools at all. Children were routinely beaten in schools for speaking Gaelic, which made for a sharp decline in speakers. Thus, the linguistic map of Scotland changed forever.

It was drastically changed again when Scottish English (the main dialect of English in Scotland) came along and replaced Scots in much of the country. Which brings us to today, where English (or more specifically Scottish English) is the main language of Scotland.

Today, we have a nationalist government in power. Scotland is a nation divided over the constitutional question of Scottish independence, which has led to a battle between nationalists and unionists. Unfortunately, in battles like this, most things are politicised, especially languages.

Opposition to reviving Gaelic and recognising Scots as a language comes predominantly from the unionist side and is viewed mainly as a waste of government time, money and resources. You get people shouting about road signs, calling them dangerous, and even calling Scots racist. There are many slurs used against these two languages, the most harmful being the accusation that Gaelic and Scots are nationalist tools. Not only is this hurtful to the languages and their speakers, some of whom are unionist themselves, it is also plain false.

A matter of culture, not politics

The Gaelic Language (Scotland) Act 2005 – which created Bòrd na Gàidhlig, requires that Gaelic language plans be created, and aims to designate Gaelic as an official language of Scotland – was passed by a unionist government. While measures for Scots as a language were brought forward by the SNP, a nationalist party, that does not make the language inherently nationalistic. In the 2011 census, nearly a third of Scotland’s population speaks Scots, many of whom, statistically speaking, may be unionists. The fact is, this line of argument has no leg to stand on.

The link between Gaelic, Scots and nationalism is extremely harmful to the revival efforts, which are neither partisan nor political in nature. Revival of these languages is about protecting the culture and heritage of our beautiful country. We owe a vast amount of our history to Gaelic and Scots; some of the best literature to come from Scotland is in Scots, such as Robert Burns’ poetry. And Gaelic has given us a lot of the culture we still hold dear today, like shinty and ceilidhs, and many, many place names. To throw that away would be to throw away most of the rich culture of Scotland.

The current revival strategies are working, but they’re working too slowly. The fact that Duolingo hosts a Gaelic course means anybody can learn the language. The SpeakGaelic series and online course is another free resource that’s extremely helpful, as well as BBC Bitesize. The rise of Gaelic Medium Education (GME) is amazing and will be key in educating the next generation of the Gaelic-speaking workforce.

But more still needs to be done. There are regions in Scotland where GME and Gaelic (Learners) aren’t available (such as Dumfries & Galloway), and a measly minority of universities offer joint courses with Gaelic or teach in Gaelic. There needs to be a national push for the training of more Gaelic teachers (along with teachers of other subjects across the board) and existing resources need to be of better quality with more funding.

In Wales, it is compulsory to learn the Welsh language until 16, meaning it is taught in every school in Wales. This has stabilised the number of speakers in Wales and has begun to reverse the decline in numbers. It could be a massive help to Gaelic if we introduced this in Scotland.

What more can be done?

Gaelic culture needs to be brought into the mainstream by encouraging the increased production of modern Gaelic music, TV programmes, films and other media. Gaelic sports should be shown on popular channels. Funding should be allocated to translating popular TV programmes and films into Gaelic. Wales has a dedicated channel for Welsh-speaking programmes – S4C – which offers a range of TV programmes and films. While Scotland has BBC Alba, it’s not comparable to the quality of S4C and offers a much narrower range of programming. With a better quality and higher volume of programming, BBC Alba could encourage more people to learn Gaelic and help learners learn it.

Scots should have SQA courses up to Advanced Higher level, meaning teachers need to be trained. Online courses need to be created to teach Scots – ideally a Duolingo course and courses modelled on SpeakGaelic.

I would like to give a special shout-out to Len Pennie for her Scots Word of the Day series on TikTok, which has taught myself and thousands of others a lot about the Scots leid.

Scots literature requires more funding to bring it back to the world-class level it was once at. This has to start in the classroom, with students studying and writing their own poyums and stories. Scots literature education must continue in Scottish universities: it should be modelled on English literature courses and be offered as an elective course.

In short, Gaelic and Scots will likely continue to be kicked about as political footballs. But I hope that this article has helped to spread awareness of Gaelic and Scots and cleared up some misinformation.

I want to see a Scotland where Gaelic is back in the mainstream, Scots is a respected language once more and anybody can freely and easily learn both. All parties with representation in the Scottish Parliament supported more measures to increase the number of speakers of Gaelic in their manifestos, so why can’t we implement those measures now, when they are most needed?

Cameron Greer is a Gaelic, Scots and political activist based in Langholm and Aberdeen. He's a student of Gaelic and Politics at the University of Aberdeen and has written for the Eskdale and Liddesdale Advertiser.