Sue Dymond gives her perspective on the Russian invasion of Ukraine and looks at core values and beliefs. 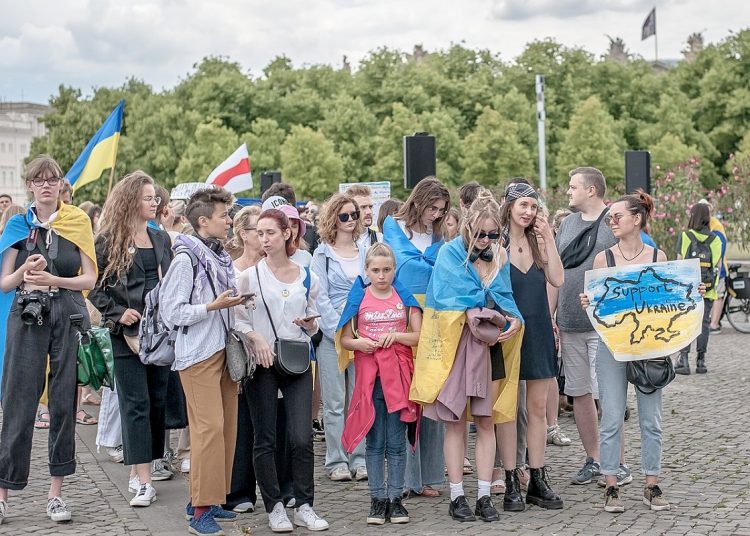 Demonstration against the war in the Ukraine - licensed under the Creative Commons Attribution 2.0 Generic

My pacifism is deep rooted. It goes back many generations on both sides of my family, both Quakerism and Methodism run deep in our family history. I grew up living and breathing pacifism without much thought, nobody challenged me on it as everyone else I knew was anti-nuclear/pacifist/liberal left leaning.

My unrelated significant elders were Greenham women and/or determinedly anti-nuclear. Perhaps most influentially my grandfather, whose ethical base was Methodism, as a pacifist, had been a stretcher bearer in WWI. Like many survivors, Grandfather never talked about his experiences, which of course piqued my curiosity. To try to comprehend what his experience might have been I wrote a school project on WWI poetry. The WWI poetry left an indelible impression on my imagination and completed, what I thought would be, my conclusive stance on war. War was simply too brutal and morally wrong.

In my final years of secondary education, I studied history. The syllabus delved into the Russian Revolution, the rise of Fascism, Stalinism and WWII. Stalin inflicted mass starvation on a vast scale, across its enforced Soviet Union. The harshest, most deadly genocidal variant occurred in Ukraine, the Holodomor in combination with ‘Dekulakization‘.

Crucially, studying this eastern European aspect of WWII reignited the question in me; is war ever justified and if so, how? It was impossible to avoid the conclusion that WWII was, indeed, a just war and that it would have been immoral to accept Nazism either actively or passively. I also, however, concluded, that WWII was the only war that was a just war. All subsequent wars and conflicts the West fought were for cynical objectives, spheres of influence and had no moral justification.

Jumping to the present and the current war Russia is waging in Ukraine, it is obvious that history is vindicating the contemporary Ukrainian experience of their neighbour, Russia. Even prior to WWII Russian history is that of an expansionist and brutal state that challenges the reputation of even the British Empire. Almost incredibly, given Ukrainian history, Ukrainians were ambivalent towards Russia, how Ukraine has always been a bilingual country and that until recently Ukrainian was not even accepted as a ‘proper’ language and only used by ‘kulaks’.

Yet, even with incontrovertible evidence of Russia’s genocidal war of terror in Ukraine I read and hear much comment from left-wing pacifist academics that Ukraine has a Nazism problem. These pacifist leaders accuse Ukraine of Russo-phobia and the banning of Russian language. These false narratives can be easy to believe, and if we do not attempt to seek the truth, we deny the victims of this war a voice.

The Ukrainians are the first-hand witnesses of Russian aggression. When we accord our pacifist authorities/leaders unquestioning loyalty it can appear to be superficially rational to discount Ukraine’s voices. The Ukrainians’ witness accounts provide corroborating evidence that is contrary to the opinions of these so-called pacifists authorities. Ukrainians are certain that to appease or to attempt to find a non-existent neutral ground will result in their oblivion by Russia. That is not peace, that is genocide. A passivist’s stance on Russia

Pacifists often argue that there must be a neutral/passive zone for them to inhabit. Sometimes there is such a zone but every conflict has to be assessed individually. The arguments I have heard and read espoused by leading pacifists seem to omit the implications for this neutrality. Given Russia’s current and past behaviour I cannot conceive how this constitutes pacifism. We cannot use previous conflicts/wars as a means to automatically transpose or justify a neutral position. On this basis the fact is that in this war there is no possible neutral position that would not enable Russia to commit atrocities in Ukraine on an even grander scale than it is incontrovertibly and presently doing so.

Understanding that this war is justified is only half of the equation. It doesn’t engender a pacifist’s active support for Ukraine fighting off their aggressor. So, in spite of my ingrained pacifism I find myself surprised and wondering why I am now so hawkish about arming Ukraine. Yes, pacifism is part of my identity, even my ego. It would seem my personal values and ethics would preclude my avowed support for arming Ukraine.

One of my motivations for examining my pacifism has been empathy for Ukraine and its people as we have common causes, that of freedom and democracy. Empathy is an easy word to write and speak. It is much harder to actively develop a true empathic understanding of another’s perspective. The concept of empathy is often oversimplified as the ability and willingness to put yourself in someone else’s shoes.

To develop a true empathic understanding there is a second, harder step frequently missed. This is to then step back from the other’s perspective, realising that however much we try we are not actually in the other person’s shoes. This is the process of giving agency to the other; of actively listening to and valuing what they say. This leads to genuine sympathy for their fight against Russian terror and suppression.

Whilst empathy is a motivation for examining core values and morals it is insufficient alone, it doesn’t assist in reconciling pacifist values with active support of Ukraine’s armed fight against the aggressor, Russia. If we also have a sense of justice then this adds to the motivation to examine how we find a moral path for ourselves. This leads to the question, “how can I make this war an exception to my strongly held moral convictions?” So we must examine those values to find how to navigate our own ethics.

Everyone has value systems and personal ethics that are intrinsic to our egos. We must acknowledge that ethics and personal values are very tricky territory to navigate, as at first it would seem discussing them is to question our very selves. They are interwoven and deeply embedded in our sense of self. However, it is important to be able to examine strongly held convictions like this, to understand on what basis these convictions are held and whether they stand up to scrutiny in a specific context.

When we truly realise the context of this war as a result of our active listening to the Ukrainian voices and corroborating evidence, we can find a path that is true to our pacifist values. That supports Ukraine’s active defence of our shared values of freedom and democracy. This sounds like a painful process but in essence this is developing our self-awareness.

This is not an attempt to excuse or rationalise a stance that is being declared as pacifist, nor is it an attempt to demand those with strong convictions to immediately overrule them. It is an attempt to ask everyone with strongly held convictions, values and morals to examine your reasoning why you hold them and ask yourselves, “am I holding these values because they are so intrinsically linked with my personal identity/ego that I find it hard to examine them?”

To question our core beliefs and values when circumstances change/demand is to admit our fallibility but it is also our strength, it is not a weakness to be able to adjust our moral positions with reason and thought. The process of re-examining values and morals strengthens and consolidates these values. Pacifism is not an absolute or even a set of rules, it is an action or process rather than a state of being. The process and action are that of contemplation of our own biases and the evidenced facts before us.

To contemplate how we approach our pacifist values is of benefit to our values and hence ourselves, it strengthens integrity. We should therefore own our own pacifism and treat our pacifist values as a rational position that can and should be questioned without feeling threatened, or a sense of loss. We must allow ourselves the time and the space to question and reason with our values. 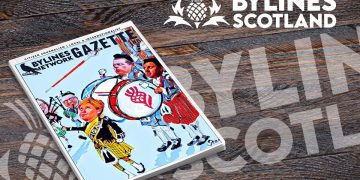 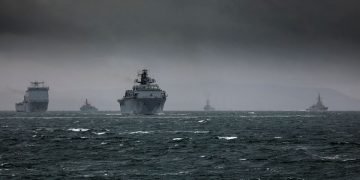