By getting cold feet over voting reform, Labour has missed an opportunity that might have saved the union. 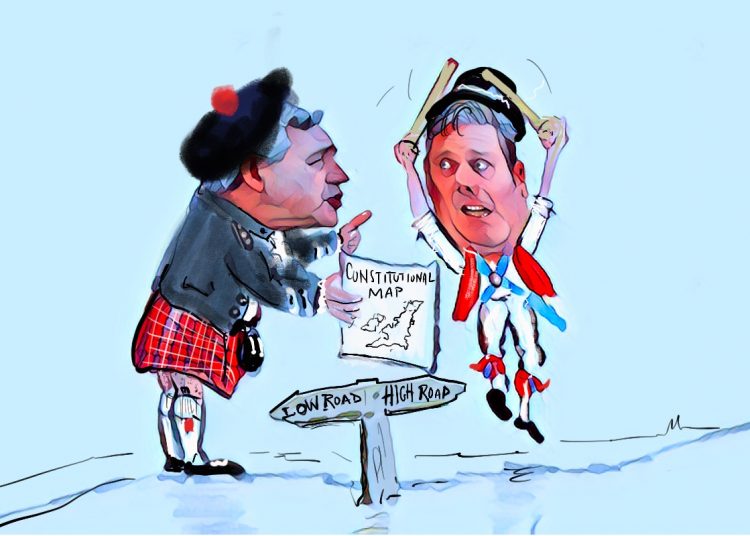 So unimpressed is Scottish Labour that it has not bothered to promote Gordon Brown’s plan for creating a “new Britain”.

Before reviewing Gordon Brown’s new constitutional blueprint for the UK and, most notably, for Scotland, I thought it wise to actually read the full thing. So, where better to look than on Scottish Labour’s website? It was a fruitless search. The document is not there, or if it is, it is hidden in some dusty digital recess. Such was the media fanfare given to the Brown plan on its launch that it surely should have been the splash headline on one of Scottish Labour’s key digital platforms. That it’s not there perhaps says the Labour Party in Scotland is not as marketing sharp as it should be, or that Brown’s latest plan to ‘save the union’ left Anas Sarwar’s party as underwhelmed as the rest of Scotland.

Gordon Brown is a serious man. He’s a heavyweight, well-read, thoughtful intellectual. There are few of his cerebral weight in politics these days, and we could do with more like him. He’s also a good Scot and a good man. His proposals to devolve a range of important powers to local authorities in England are sensible. Since the 2010 coalition government scrapped England’s Regional Development Agencies, many of the most deserving parts of England have been without effective economic development machinery and powers.

Almost all such powers are fully devolved to Scotland, though the post-Brexit Conservative government has been undermining the devolution settlement in numerous ways. One of the structural weaknesses of the Brown plan is just that – a Tory government in London will always want to take power to itself and take power away from Edinburgh. Scotland would have to go on living next door to a different sort of elephant every time the government or prime minister changed in London.

Brown has proposed a UK-wide talking shop chaired by the prime minister of the day. This might just be a helpful mechanism when London’s government is Left of Centre, but likely to be a forum for profound disagreement and public bitterness when Westminster is in Tory charge. He wants to see Scotland better represented in the great Whitehall departments of state, like the Treasury and the Foreign, Commonwealth and Development Office. How will this be done if, after the next general election, the Labour party still has only one MP in Scotland?

What if it has five MPs? Will these Labour MPs represent the democratic wishes of the Scottish people? Will a Labour government ask SNP MPs, or even a Tory or two, or what about a Lib Dem here or there? Do we detect a democratic weakness from a Labour Party that once upon a time was keen on as much democracy as possible?

Moving a few thousand civil service jobs from London to Scotland, as Brown proposes, must always be welcome, though it’s hardly going to fundamentally change the Scottish economy or do much to help Scotland tackle chronic problems like poor health, educational under-achievement and income inequality. Sadly, for a man who genuinely and deeply cares about the less fortunate in life, Brown offers nothing that gives hope of radical and lasting change to the economic status quo.

Labour is surely correct in proposing to abolish the House of Lords. Everyone on the British Left, and even some in the Centre-Right, know the Lords is a shameful stain on British democracy. Brown should have insisted that abolition be immediately adopted as Labour policy. Putting the matter to ‘consultation’ makes Labour look indecisive and uncertain. An idea, that if grabbed firmly, would have won widespread public support has been neutered and become a ‘so what’ item.

The union has been weakened

But where the Brown plan spectacularly fails is in completely ignoring voting reform.

Introducing PR for Westminster elections could have been a sure fire way of saving the union. Scottish voters might have been attracted to the idea of PR for Westminster elections seeing it as a way to greatly reducing the possibility of the Conservative Party ever again holding unfettered power at Westminster. The old sore that ‘Scotland doesn’t vote for Conservative governments but gets one most of the time’ could have been put to bed.

The moment to save the union was there to be grasped. Voting reform, along with the abolition of the Lords and much tighter control of party funding and MPs’ incomes, had the potential to be a package of compelling voter attraction in Scotland. The moment has passed. Courage deserted Keir Starmer. The union is no safer today than it was before the Brown plan was announced. The opportunity for radical realignment and to strengthen the union has been lost.

Indeed, following the Supreme Court’s ruling that all power over the constitution legally sits in London, the union has been further weakened by the latest polling that shows 56% of Scots want independence. Gordon Brown’s new agenda appears not to be the talk of the steamie. It has come, and it has gone.