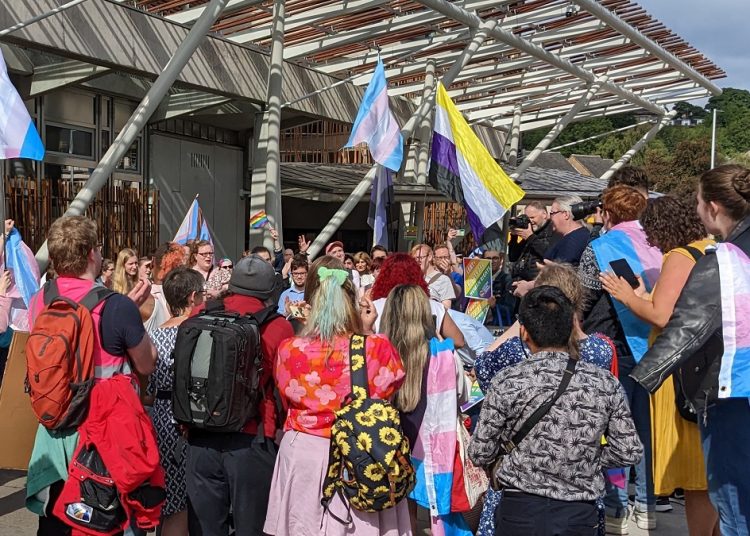 March and rally outside the Scottish Parliament (Holyrood), 5 September 2022 in support of Trans rights. Picture by Kat Cary, used with permission.

Just before the Christmas recess, the Scottish Parliament voted for the Gender Recognition Reform (Scotland) Bill. It passed with a majority of 47. The final stage of the legislative process should see King Charles IlI signing the bill to make it an act, at which point it becomes the law of Scotland.

Except, the bill may never reach the Royal desk.

Alister Jack, the Conservative Secretary of State for Scotland (SoS) has let it be known that he may invoke Article 35 of The Scotland Act. Article 35, which has never before been used, empowers the SoS to intervene in the affairs of the Holyrood parliament if there are:

“reasonable grounds to believe that legislation would be incompatible with any international obligations or the interests of defence or national security, or

You can just about envision the theme song to Rocky

So, only a handful of weeks after the UK Supreme Court (UKSC) ruled in London’s favour over which parliament has the right to call an independence referendum, the constitutional boxing gloves are back on.

Should London be moved to stop the gender recognition reform bill, the response of the Scottish government is already known. First, it will challenge the move in the Supreme Court, arguing that:

That’s the legal and constitutional stuff.

It’s not just the people of Scotland; the whole world is watching

If you like real meat on your political plate, it’s the second element of the Scottish government’s strategy that has the potential to derail London’s case and score a big win for the independence cause, even if the court rule in London’s favour. It is the simple matter of democracy.

Edinburgh will put its democracy case to the courts, though much more importantly it will take its argument to the people of Scotland and to the democratic world beyond the narrow shores of the UK.

It will keep repeating there is no foundation for the UK government stopping the gender recognition reform bill becoming the law of Scotland. All the time it will tell the world that Scottish democracy is being frustrated by London for Tory party political reasons and to weaken the forces campaigning for independence.

The independence cause will build on the outrage felt in Scotland when the UKSC trashed Holyrood’s contention that it had been given a democratic mandate by Scotland’s voters to hold an independence referendum. Scotland’s government was dismissed with a palpably arrogant swat by the Supreme Court bench, the judgement made even less palatable to Edinburgh for it being given by the Scottish judge who presides over the UKSC. 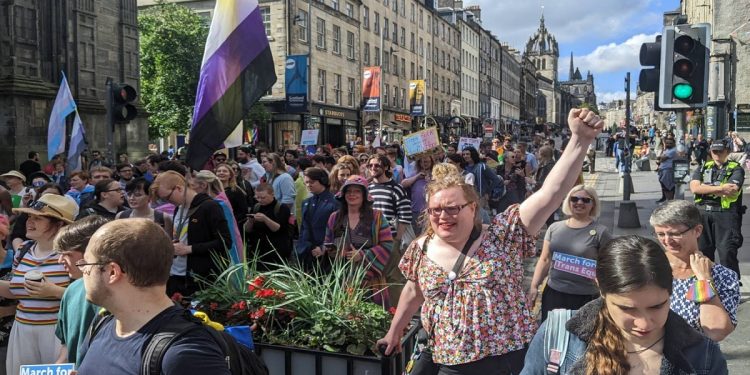 But the fall out from the UKSC ruling had exactly the opposite effect the unionist parties wanted. They had imagined that the blow to the standing of the Scottish Parliament would persuade large numbers of Scots to abandon thoughts of a second independence referendum and lose interest in the ‘constitutional question’, as the independence argument is often known by its opponents.

What happened was a surge in support for independence. Five polls have been conducted since the UKSC ruling. Each has given a healthy majority to the independence side. Indeed, one poll recorded 56% in favour. None had less than 53% for a Yes to independence vote. Such high figures have not been seen before.

Scotland felt itself being treated as a London plaything, that London was blocking any democratic route to Scotland deciding its own destiny. The UKSC rubbed Scotland up the wrong way. Ancient feelings of nationhood bubbled up and resentment at perceived English arrogance saw many Scots ask themselves if the 314-year-old union has run its course.

Much of Scotland – even some on the pro-union side – feel Scotland is simply not being listened to by London. Scotland, they say, was completely ignored when 62% of its voters chose to remain in the EU. Scotland, they argue, has been shown by the UKSC’s rejection of the Scottish government’s referendum case, to have no legal route to decide its own constitutional future. Now, far away London is considering a direct challenge to the democratic legitimacy of Holyrood. Enough is enough is the cry more and more frequently heard across Scotland.

England telling Scotland what to do has never been a productive approach for Scotland’s Tories. The country has not given the Conservatives a majority of its MPs since 1956. In the Thatcher years there was a time when not a single Tory MP could be found north of the border. The next general election is already looking bad for The Scottish Conservative and Unionist Party. All six of their seats are forecast to fall to the SNP.

It won’t be a matter of sexual and gender equality that will change the game, but the trampling on Scotland’s democracy. Rishi Sunak and his Scottish Secretary would be wrong to think that the current debate around gender equality can be weaponised to save the Union. Scots, like people worldwide, tend to get indignant if their self-respect is trodden on by clumsy feet.

Many Scots who don’t agree with this bill, or indeed Nicola Sturgeon, will not take well to London intervention. Evidence of that can be found on the Boxing Day letters page of The Times. A Tom Tindle of Callander, Perth and Kinross, wrote that he is not a supporter of Scottish independence and has “grave concerns about the new gender law. It is though,” he went on to say, “unacceptable for the UK government to consider a veto. Westminster must respect the sovereignty of our devolved parliament.”

It’s a matter of history.

It’s a matter of pride.

It’s a matter of democracy.

The dam of union will not hold forever if Scotland’s democracy is regularly weakened by ill-thought London tactics.